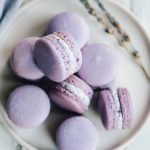 A recipe for perfect lavender macarons with a fragrant lavender buttercream filling. The buttercream frosting also works great for cupcakes and cakes!

* There’s a fine line between fragrant and soapy when it comes to lavender! I suggest adding a drop or two at a time to figure out the right fit for you.

**Notes on Making & Troubleshooting Buttercream Frosting: If the frosting is too soft and doesn’t seem to be coming together, it’s possible that it’s too warm. You could try popping it into the fridge for 10-15 minutes and then re-mixing with the paddle attachment in your electric mixer until it comes together and is smooth and satiny. In general it’s hard to over-whip buttercream, so I would err on the side of mixing it longer to see if you can salvage it, even as long as 15 minutes!