Chiang Mai is a bustling city in the north of Thailand.  We checked into Malak guesthouse, which was recommended by the Lonely Planet.  The price was right, at about $5 for a private room with hot shower.  Like the alpha dog marking its territory, the first thing I did was check out the bathroom.  I noticed that there was no flushing apparatus to be found on the toilet.  Mystified, I checked with the owner.  He informed me that I was supposed to fill the little bucket in the bathroom with water and dump it in the toilet to wash down the waste.  I’ve peed in toilets with no seats and holes in the ground and I can’t remember the last time I left the country and was able to flush paper and not put in a garbage bin but this was a new one.  Luckily I had only gone number one.  I couldn’t even imagine the amount of water required to wash down number two.  Little did I know, this is pretty normal in Thailand and something I would get used to throughout the course of the trip. We could have survived the toilet but the noises in the night put us over the edge.  Mopeds run rampant in Chiang Mai and our street had them roaring up and down at all hours of the night.  In addition, a couple of apparently new-acquaintances got to know each other until around 2am and then proceeded to have noisy coitus for another hour after.  Someone in the room across the hall coughed all night long.  In my expertise as a third year medical student, I’d say it was probably either lung cancer or TB.  Check out the Thai healthcare system, I highly recommend it! 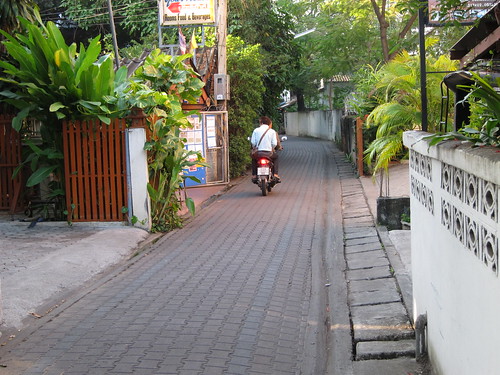 Needless to say we packed our bags very early in the morning and found a different place to stay down the street for the next night.  Kavil guesthouse was airy, clean, quiet (if you snag a room off the street) and 200B ($7) a night.

We spent our first day in Chiang Mai walking around the city and eating.  We found this very tiring, so we also got a Thai massage. Life on holiday is grueling, as you can imagine.  We had heard that a group of blind men and women were some of the most skilled masseurs in Chiang Mai, so we decided to check them out.  For $5 I received the most painful but most awesome massage I’ve ever had.  As he kept pushing directly on every pressure point that exists on my body I kept reminding myself that this was his job and that he probably hadn’t broken the bones of any clients before.  I silently thanked a lifetime of calcium fortified dairy products.  Once he was done the difference was amazing.  The only way I can describe how I felt was weightless.  I think I was at least three inches taller; the stoop from hours of studying for med school had been pounded and twisted away.