Travel » Flying from the US to Thailand

Pat and I had a series of three flights to get to Bangkok.  We took Spirit Air from Chicago to New York and then Eastern China Airlines from New York to Shanghai to Bangkok.  The longest leg was NY to Shanghai of course, at about 14 hours.  We decided we were going to be smart about jet lag and planned to immediately start sleeping like it was 13 hours ahead.  As soon as we got on the flight at 3:00 in the afternoon (4:00am in Bangkok) we took some natural sleep aids (thanks Ambien!) and slept about 6 hours.  We forced ourselves to stay awake when it would be the middle of the night in Wisconsin by watching Bridesmaids and the Hangover 2 on our laptop.  Hangover 2 is set in Thailand, so it was pretty much travel research.  “One night in Bangkok…” Thanks Mike Tyson, I still have that number in my head.

As strange as it sounds, I was looking forward to the meals on the airplane.  In my experience, the amenities are always better when you aren’t flying a US-based airline.  Plus, we had ordered special vegetarian meals, which meant they would be filling and healthy, right?  Rookie mistake.  A vegetarian meal on Eastern China Air consists of either mushy brown rice with overcooked carrots and broccoli or pieces of bread with alternating cucumbers, lettuce and tomato formed into a double-decker sandwich.  Luckily we had granola bars and chex mix along to help fill the nutritional gaps. Chinese beer rounded out our diet. 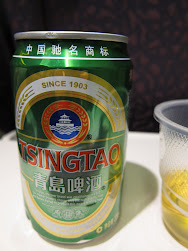 We also enjoyed a little stretching and aerobics to keep the blood flowing – no DVTs for us! 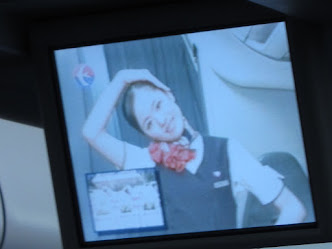 As we were going through customs in China on our layover, I heard someone say my name.  I turned around to see Erika, a girl I’m in med school with, in line with her husband.  Somehow we had ended up on the same flight to the same country on our holiday break.  This makes me two for two, given that I ran into a fellow med student last winter break on my flight to Panama (the country, not the crappy spring break destination in Florida).  Small world?

We had a little time in the Shaighai airport to explore.  I contemplated buying some fresh crab. 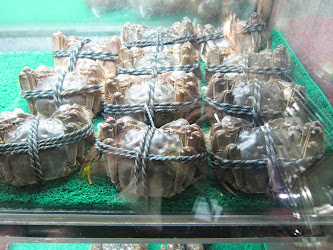 Pat and I landed in Bangkok at 2:30am.  We gathered our backpacks that had thankfully arrived and caught a cab to Hotel Rafael Mansion.  Despite being at the end of a dusty alley in the middle of nowhere, it broke the bank at about $30 a night.  We were told to enjoy all the things in the mini fridge, as they were included in the price of the room. This turned out to be two cans of coke and a bottle of water.  Jackpot!

Despite Pat’s protests about it being 4:00 in the morning, I was determined to keep us on a strict sleep schedule and set the alarm for 9:00am.