Oh boy, this baked french toast recipe is the stuff dreams are made of. For some reason, pillowy is the best word I can come up with to describe it. Piles of pillowy goodness topped with whipped greek yogurt topping and these incredible candied pecans that have a bit of a meringue-like, well, pillowy, texture to them. Om, nom nom.

Let’s talk about the whipped Greek yogurt topping. When I first saw the recipe had Greek yogurt in the title, I thought, “Oh great, something healthy to balance out the rest of the dish.” Wee-ell, there’s a 2:1 heavy cream to Greek yogurt ratio in the topping, so, unfortunately, health food is not. Tangy and light and pillowy (ok, that’s the last time I promise) and something I want to slather on everything in sight – definitely. The recipe also has the option of partially being made ahead, so you don’t have to scramble to put the entire shebang together in the morning. It’s great for making for guests, or when you are a guest at someone else’s place in my case. I made this while we were home for the holidays visiting my in-laws. Making it the night before meant I still got to sleep in a bit – I was on vacation after all. The dish was a hit and was obviously part of my master plan to ingratiate myself into their good graces with food. Not that that is needed at all. I’m so lucky to have married into the nicest and most welcoming family on the planet. Going home to Pat’s family has become going home to my family. It doesn’t get much luckier than that. 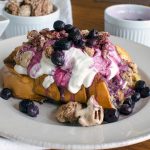 Can be partially made ahead to cut down on cook time the morning of.