You guys, today’s recipe is going to blow.your.mind. I really, really love the idea of blurring the lines between savory and sweet with recipes, especially dessert. Recently, I’ve been doing some recipe development projects on the side.  I absolutely love creating recipes and just finished a big project with the folks at Salemville Blue Cheese. All of Salemville’s cheeses are sustainably produced by an Amish community in Cambria, Wisconsin. Cows are hand-milked twice daily without the use of machines or electricity and milk is delivered to the factory in traditional 10-gallon milk cans! This project was extra fun because I got a huge box of blue cheese in the mail! Pat and I have been eating blue cheese like crazy and I’m not even 1% sick of it, it’s that good. They originally challenged me to come up with a blue cheese dessert recipe and I racked my brain for ideas. My first thought was that blue cheese pairs great with dark chocolate. Given that it’s been so nice recently, it’s getting to be ice cream season and things just came together from there. I asked the folks at Salemville if I could share this recipe I created for Dark Chocolate Blue Cheese ice cream with all of you because I really hit this one out of the park (brushes shoulder off)! Right now Salemville is hosting a contest with prizes including a Le Creuset cookware set and a Kitchenaid mixer! To enter, just submit your favorite blue cheese recipe at Salemville.com or on their Facebook page This blue cheese ice cream recipe is one of five recipes I created for them in honor of their giveaway. You can see the other recipes here. 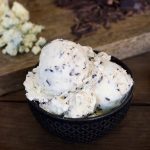 I’m sharing this recipe with you today with the permission of the folks at Salemville Blue Cheese company. I was paid to create this recipe, but all opinions are my own.