Even though I’ve never eaten at Momofuku or Momofuku Milk Bar, thanks to the internet I’ve been a long time fan. I’ve been steadily collecting a collection of Momofuku pins on Pinterest.

The bagel bombs are amazing! I used goat cheese instead of cream cheese, which was awesome! I highly recommend reading through the entire recipe first. I am one of those “jump right in” cooks, which got me in a bit of trouble as the bagel bomb “stuffing” needs to be prepared in advance and you have to save the bacon grease. I try to clean the kitchen as I go which resulted in me frying up a second batch of bacon.

This then resulted in me eating said second batch of bacon, so maybe it was a good mistake? P.S. – How cute are these Anthropologie dishes? They are a special edition Pacifica theme by artist Linda Fahey (who lives about 25 minutes away from me! Small world!). 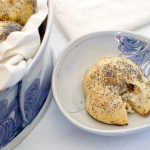 For the Momofuku “Mother Dough”:

Based on the famous Momofuku Bagel Bombs by Christina Tosi