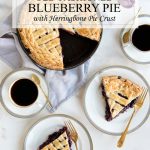 A blueberry pie recipe that has been in our family for three generations. The all butter pie crust is beautifully decorated with a herringbone technique. 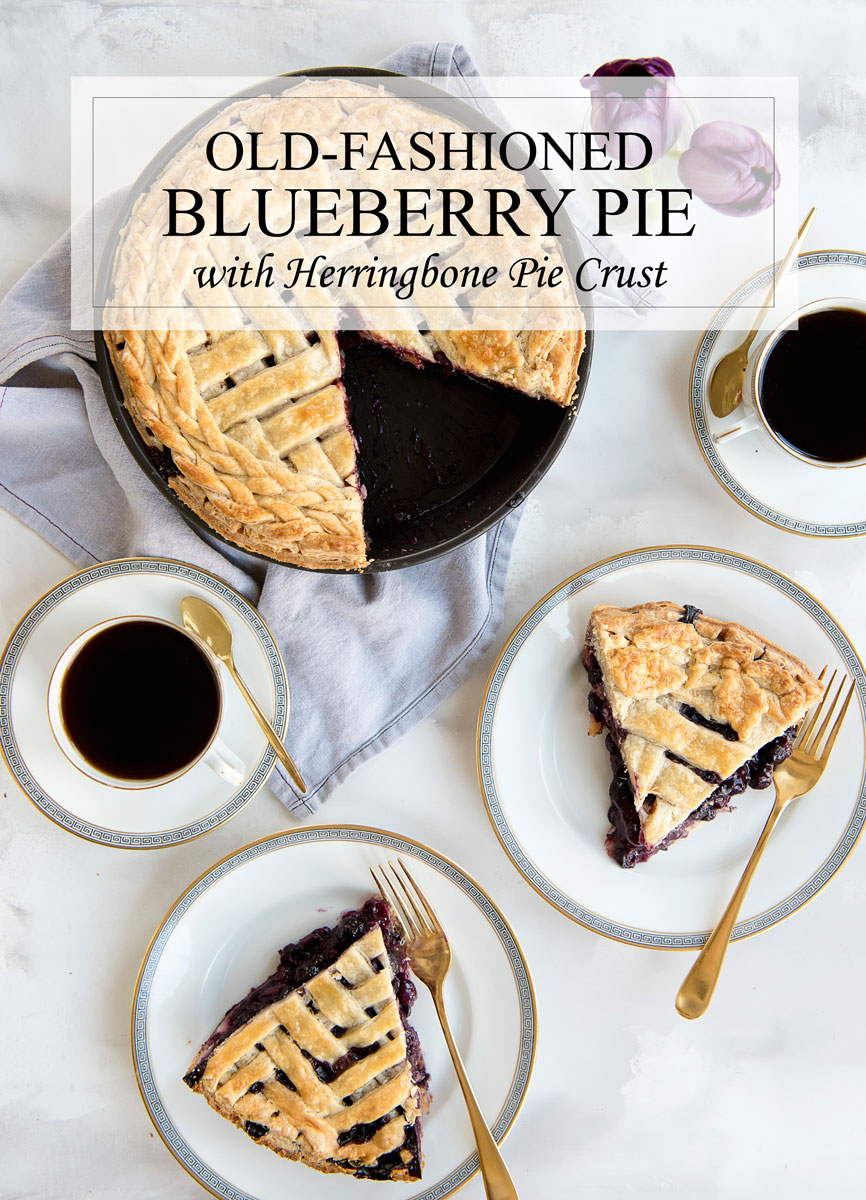 People often ask what my favorite thing to make is. I have so many things that I enjoy making, like technically challenging french macarons, or my super popular stuffed cupcakes. It’s also really satisfying to make an easy and healthy dinner with Pat. My absolute favorite thing though, something that is almost in my DNA, is pie. I have been making this blueberry pie recipe since I was five years old.  Seriously.

Get the blueberry pie recipe after the jump!

Pies were our thing growing up. Our go-to dessert for a special occasion, or just because it was berry season.

The recipe itself is from a well-thumbed Betty Crocker cookbook that was passed down from my grandma.  My mom still has the original, but my version of the recipe is on a floury, blueberry-stained index card. I can officially call it award-winning too. When I was in kindergarten, she entered the recipe into a pie contest in a rural town in Wisconsin shortly after we moved there.

As a stranger winning the pie contest, she almost ensured that she had no friends for the first year we lived there. It took small town Wisconsin a while to get over the sting of defeat. 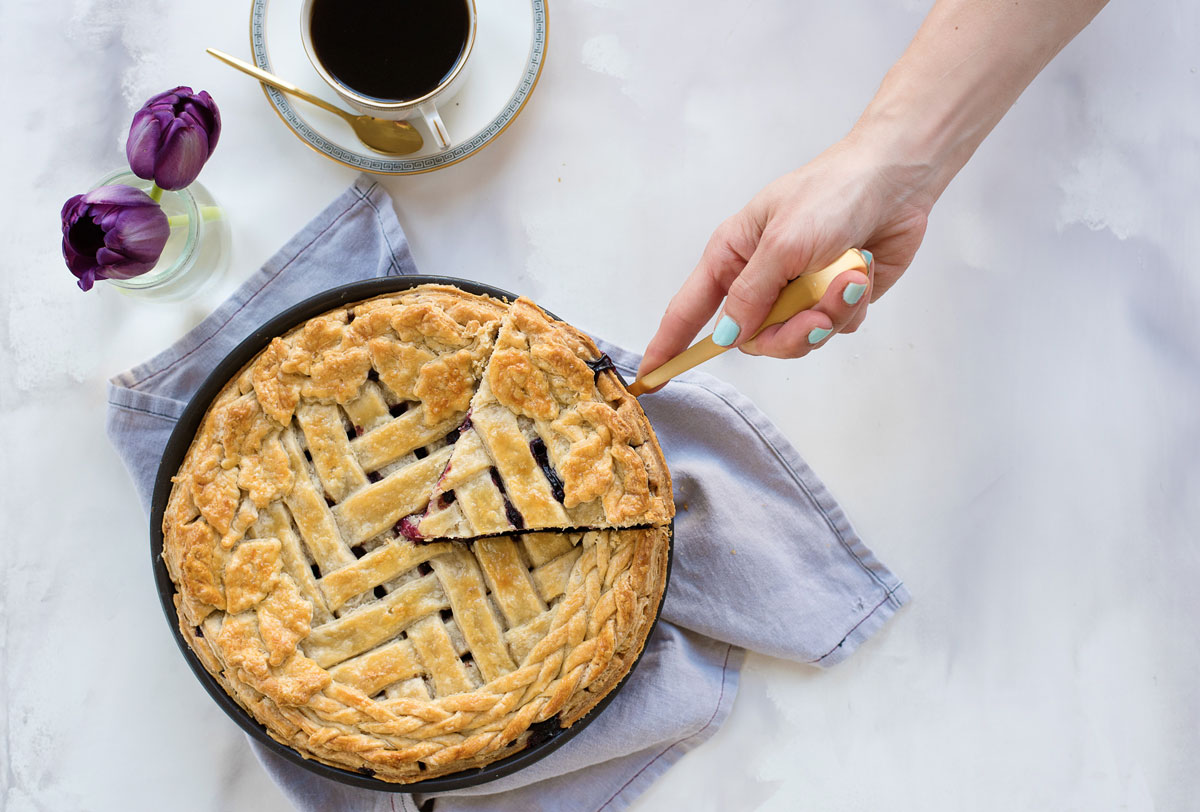 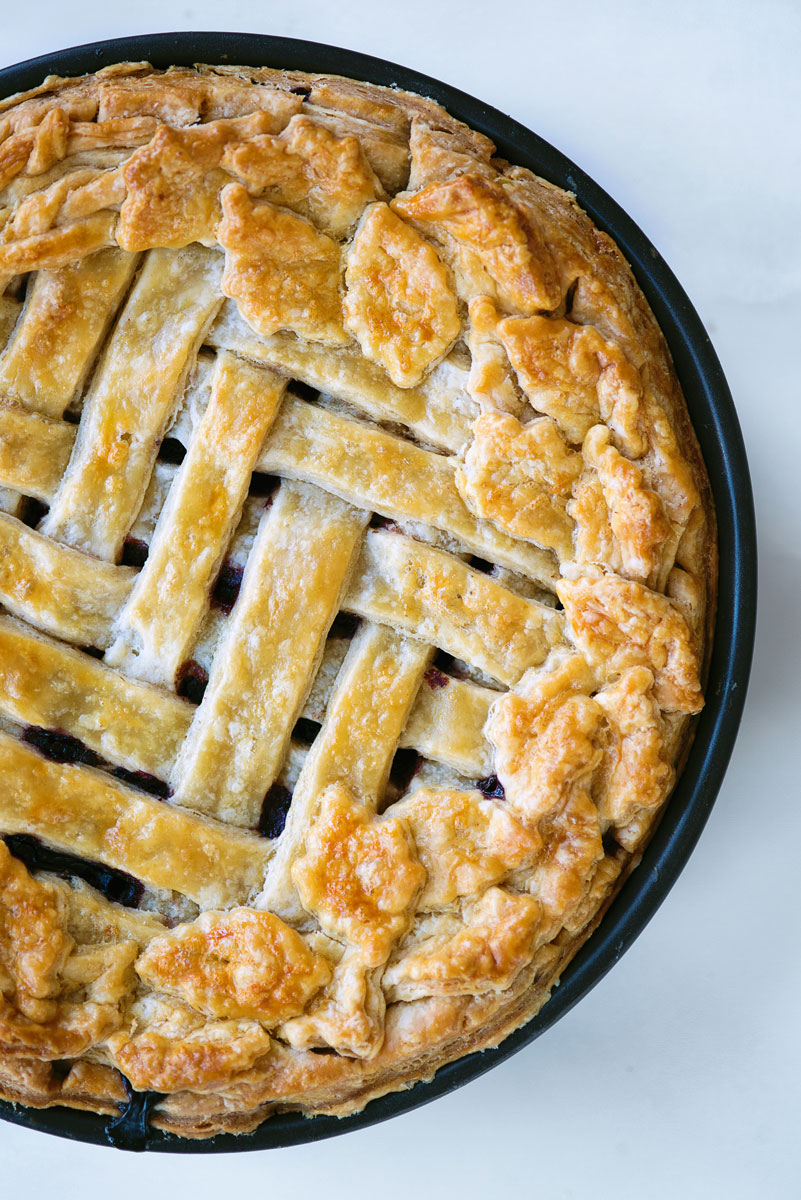 Despite making this pie for decades, there’s always time to teach an old dog new tricks! This pie features a fun twist on the lattice with this herringbone pie crust pattern. It took me a few tries to figure it out, but thanks to the wonders of YouTube it’s now my new favorite technique! 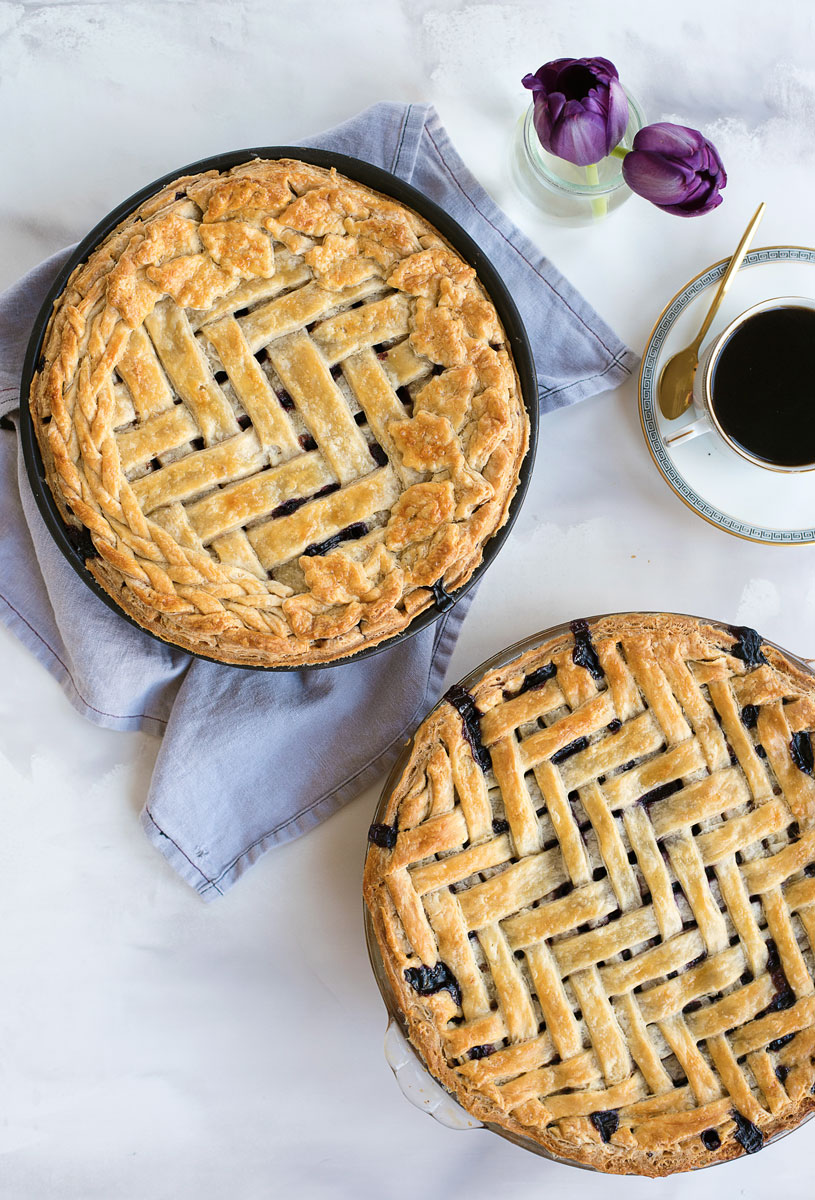 Before I mastered the lattice crust, I did most of my pies using a cookie cutter. Pick a simple shape, like a scalloped edge circle, and cut out multiple shapes. Starting at the edge, layer your shapes in rings on top of the pie filling, ending with a single shape in the center.  This technique is very forgiving – if you don’t roll your dough out evenly, or the dough breaks and you have to piece it together – you won’t even notice it on the final product!  You can see an example in the last photo of this post.

I hope you enjoy it as much as three generations of my family have. 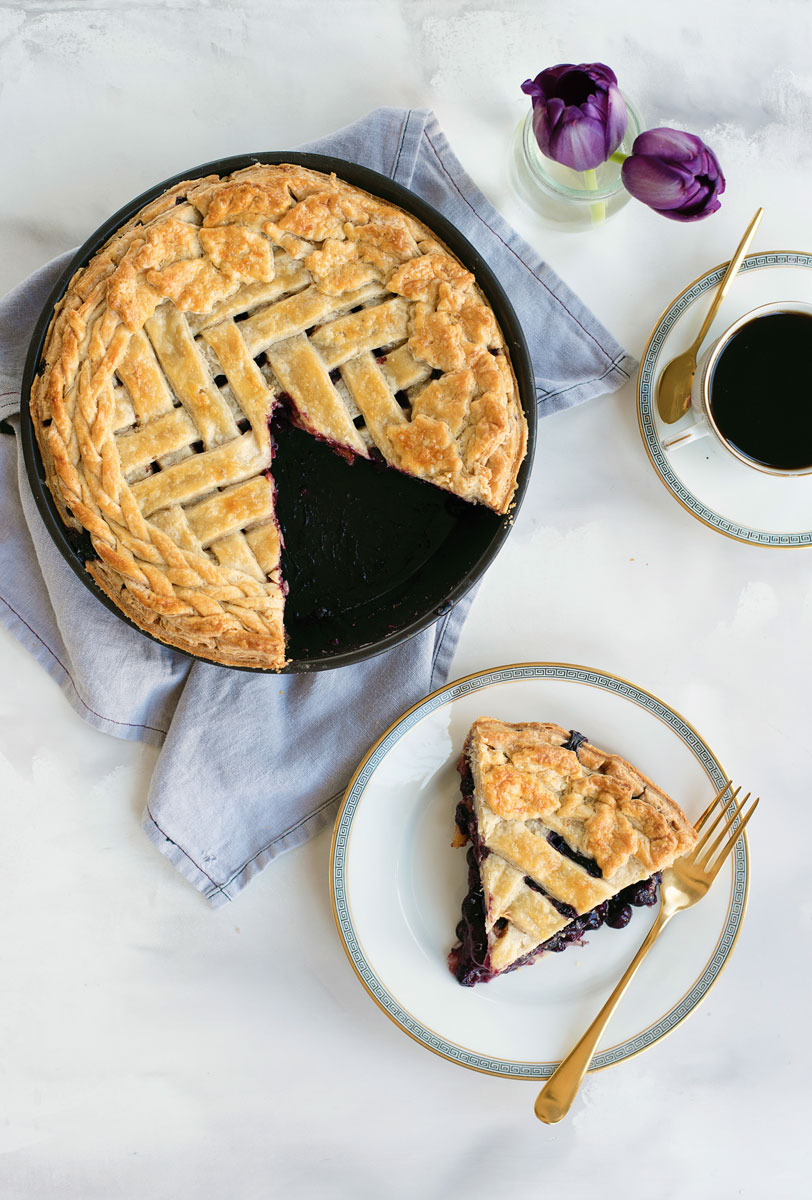 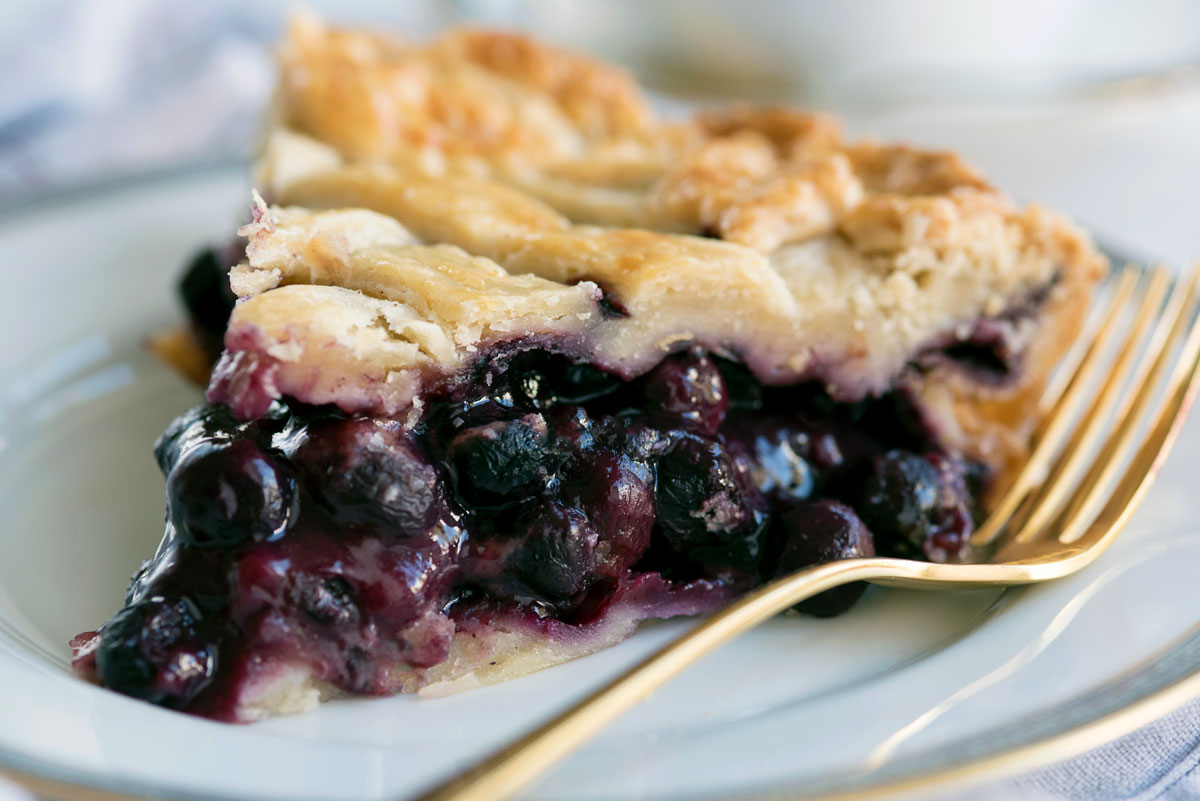 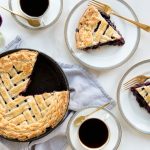 A blueberry pie recipe that has been in our family for three generations. The all-butter pie crust is beautifully-decorated with a herringbone technique. Adapted from the 1978 Betty Crocker Cookbook

My pie dough recipe or one of your choosing

If making a traditional (non-lattice) pie crust, you’ll need one batch of my all-butter pie dough. If making a lattice or herringbone crust, you’ll need an additional half batch to ensure you have enough dough. If you want to do a lattice crust plus additional decorations like the braids or shapes you see on the pie here, you’ll want a double batch of all butter pie dough. 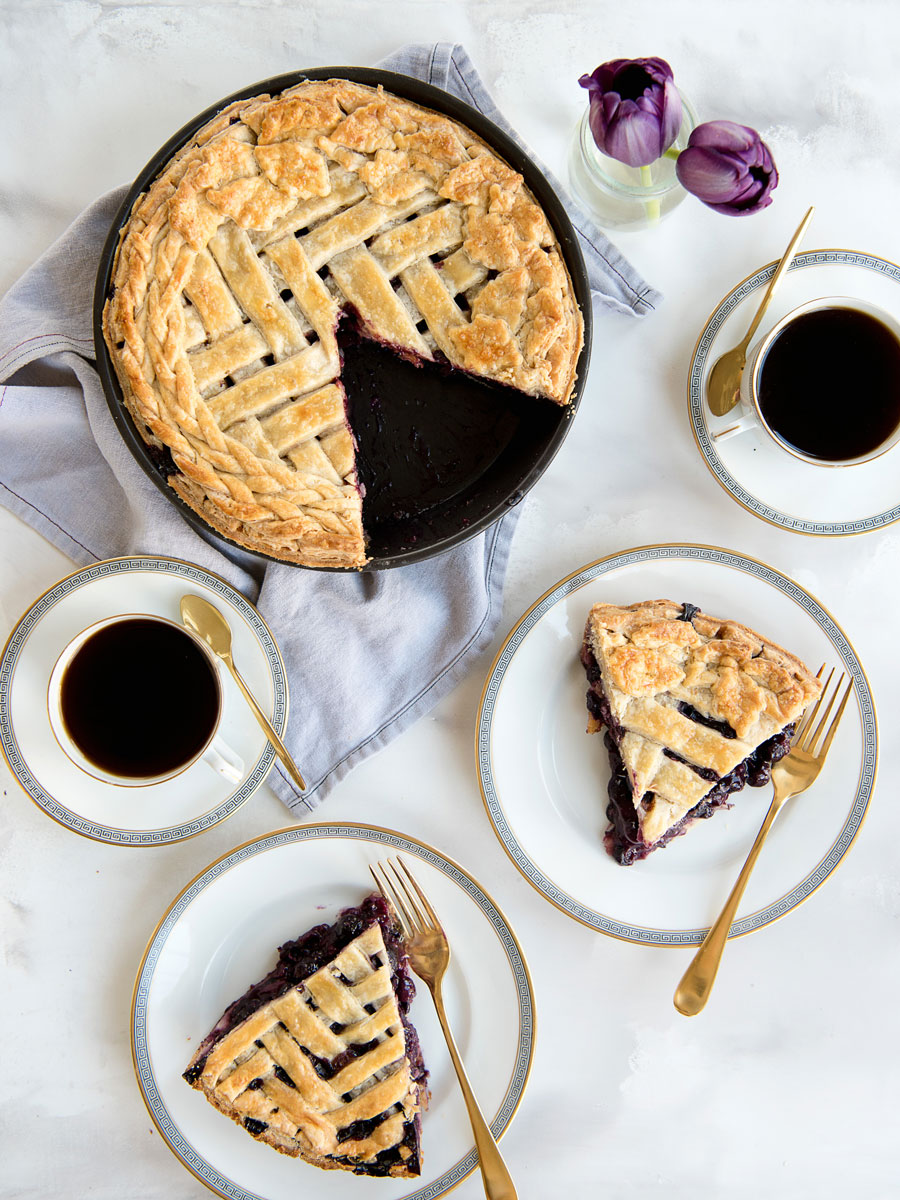 P.S. – This post is an update of one that was published in June 2012. Wondering what my photos were like when I started in 2012? Here’s one from the original post! A lot has changed in 5 years, right?