Is anyone else obsessed with Orange is the New Black? I should say I was obsessed because I watched all twelve episodes of the first season in the course of three days when I was on vacation a few weeks ago.

The show is based on someone’s real life (!) and features an amazing cast of females with poor Jason Biggs thrown in the mix. In short, a wasp-y woman in her 30s is sentenced to a year in prison because she transported drug money for her girlfriend in her early 20s. She encounters everything from an inmate nicknamed “Crazy Eyes” who calls her “Dandelion” and dubs her, her prison wife to That 70’s Show’s Laura Prepon as her sexy ex-girlfriend. It is amazing and because it’s on Netflix, you can watch the series in one go without any ads or breaks. Like I did. Anyway, on to this recipe for peach swirl buttermilk ice cream. I have to admit, my eyebrows raised a bit when I first saw this ice cream recipe. Buttermilk ice cream? What the what! The buttermilk in this recipe gives it an extra tang that is really refreshing and pleasant.  Without turning this into a wine tasting, I felt like this ice cream base is more complex than your typical ice cream.  Add in a peach swirl and it’s absolute perfection. Peaches are at their peak in flavor right now, so go out and grab ’em and make this recipe ASAP! 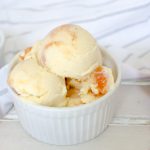 For the buttermilk ice cream base:

For the Peach swirl:

Adapted from A Cozy Kitchen