My brain is so confused right now. Having recently transplanted myself from Wisconsin to San Francisco, the fact that the weather here has been consistently in the high sixties and even low seventies recently is blowing.my.mind. It’s late October and I’m still running in shorts! There does seem to be a chill in the air that has recently developed and Karl the Fog seems to be back in town, but it’s still much warmer than I’m used to. One of my friends recently Instagrammed a photo of frost and it snapped me back to reality – it’s truly autumn!

I think the thing I miss the most is the fall color – like the ones featured so beautifully in our engagement photos. In the words of a friend, ‘the leaves do change here – that palm tree outside my house wilted last week’.  Even though we don’t have the fall leaves, I can still enjoy one of my favorite items of fall produce – the sweet potato. When I saw a recipe for Autumn Delight Cake on Sweetapolita, I was intrigued by the idea of baking a cake out of sweet potatoes! Her cake is truly a work of art and I knew nothing I could do would even become close. To make things a bit easier, I turned Rosie’s recipe into cupcakes! These lovelies are stuffed with toasted marshmallow buttercream and topped with the homemade marshmallow frosting from my S’mores cupcakes – and don’t forget the candied pecans to seal the deal!

Tip :: To make easy stuffed cupcakes, use an apple corer to gently twist out a section from the top of your unfrosted cupcake. 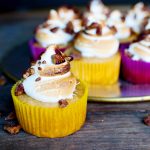